How do you explain James Stewart? 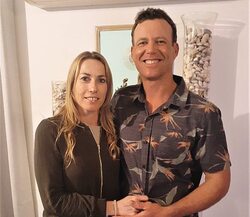 When you meet Busselton man James Stewart today, it is almost impossible to believe he spent more than half his life addicted to a daily cocktail of methamphetamine, marijuana and alcohol.

James grew up in Busselton, played footy with the Magpies into his 30s, worked as a wood machinist for a local company, all while hiding a growing addiction to alcohol, marijuana, then speed, and ultimately methamphetamines. Eventually his lifestyle came crashing down on him, threatening his mental health and his marriage, but today he is miraculously drug and alcohol free and keen to share a message of hope for those caught up in a hidden addictive lifestyle.
​
“I was insecure and a bit of a crowd pleaser, and I started smoking, drinking and using dope around age 14 just to fit in. I very quickly became addicted to those things. When I was around 20 I started taking speed, which I fell in love with straight away."

“I was one of those people who didn’t feel as quick witted as people around me and would not say much, but speed made me feel normal and able to hold my own in a group.”

When James finished his wood machinist apprenticeship he found he had a surplus of money to fuel his growing drug and alcohol habit. “My drug taking and drinking evolved from a Thursday-to-Saturday thing to an every-day-of-the-week thing,” he said. “Eventually I went from speed to methamphetamines, which was like speed on steroids and even more addictive.

“I started using needles, and it became an everyday event. Every game of footy, every day at work, I was on meth. “I became a functioning addict and was able to hide it from almost everyone around me. I was living behind a mask.”

One of the people not fooled was Jame’s wife Jasmine. The effects of the drugs and alcohol were taking a toll on their marriage, and when a job opportunity opened up in Tom Price, Jasmine encouraged him to use it to make a clean start.

“I started work in Tom Price and tried to give up meth, but I was surrounded by new people in a new setting and I couldn’t function. I felt depressed, unworthy and inadequate and started taking meth again,” he said. “I was desperate. Jasmine encouraged me to see a psychiatrist to see if it would help.

“The psychiatrist diagnosed me as adult attention deficit and prescribed dexamphetamine. I was taking nine tablets a day just to function. “But I ended up going back to meth anyway. I was injecting five, six, seven times a day while taking the tablets and started dealing as well.”

James says around 2017 the growing precariousness of his life came crashing down around him. “After three years I was laid off at Tom Price. I’d been earning around $150,000 a year but had nothing to show for it when I came back to Busselton,” he said. “My wife and I were fighting so much we accumulated 76 police visits over two years. We got to know the police really well. I had three VROs (Violence Restraining Orders) against me.

“Around this time my parents found out I was taking drugs, it broke their hearts. I was filled with shame.” James said he had been brought up in a loving and supportive home. He was adopted, and he met his biological mother when he was in his 30s.

“My biological mum had become a born-again Christian while she was pregnant with me. She told me she had prayed for me in the womb every day,” he said. “It was really difficult for her. My biological dad took off before I was born and was never seen again. She was kind of forced to put me up for adoption. But she continued to pray for me everyday.

“When she finally met me she could tell I was not going well at all. She said after that meeting she upped the prayer.”

By 2019 James and Jasmine were at the lowest point of their lives. His best efforts and the efforts of those around him had not been able to move the needle in his addictive lifestyle.

“I checked into a mental institute. I was definitely losing my mind — there were some evil spirits in both me and my wife by this point,” he said. “I was in a dark place and felt absolutely cornered. I was looking for a way out.

“Around that time, things started to change, I began to feel oppressed in my mind, a place where I had no doubt suffered much confusion. Looking back now, I can clearly recognise it as God beginning to direct my steps. My car had a yellow sticker on it and I had to get it towed from town. I went to a panel beater named Chris Sheedy to organise the tow.

“With a consciousness of God but lacking a real belief I went and saw Chris. We had an amazing talk, and I found myself visiting his church. “At the end of the service I prayed and asked Jesus Christ into my life. All I can tell you is I experienced a profound miracle.

“I had been taking drugs for more than half my life and everything I tried made no difference. But I stopped all the drugs, stopped smoking and drinking and even swearing. I was born again, just like my mum had been praying for all those years.”

James started regularly attending the Potter’s House Gospel Church Busselton. He says the toll the years of drug abuse had taken on his life and marriage began to just roll off him.

“The pastor came around to visit. We didn’t have a front door because I’d kicked it in during a fight. He brought around a new front door and installed it. “Over the next year my wife and I restored our house. It was kind of like a reflection of our lives being restored. Then I got a job and have held down steady work ever since.”

When asked how he would explain his radical transformation back from the brink of destruction, James does not hesitate. “Mate, I would say the precious blood of Jesus redeemed me back to the Creator, and the Creator can do anything” he said.
“I know how that sounds, but it is absolutely true.

“Over the years I have gotten to know a lot of drug addicts — I know there are a lot of people who are just like I was. Just like Jesus set me free, He can set them free from loneliness, depression and addiction.”

Potter’s House Busselton Pastor Greg Farrell said James’s life was a trophy to what God can do in a person’s life.

“I have pastored here in Busselton for more than 28 years, and have seen so many variations of James’ and Jasmine’s story repeated again and again — and it never loses its wonder,” he said.

“I have seen people in various states of brokenness and pain. Not everyone has a crippling drug addiction, but whatever the issue, I have found the message of hope and common sense answers for life in the Bible is more than equal to the task every time.
​
“How else would you explain amazing stories like James’ and Jasmine’s turnaround?"